Interview with Author Diana McCollum on her Coastal Coven series

Paranormal Romance author Diana McCollum’s debut novella, The Witch with the Trident Tattoo, came out from Windtree Press earlier this month. This book is the first in the Coastal Coven Series.

Welcome, Diana. Can you tell us what your book is about in a sentence or two?

Witch Ella Stone, born with an affinity for water and a scientist, is on a mission. Ocean life is disappearing off the Atlantic Coast, and Poseidon needs her to find out why. To find answers, she hires handsome, brooding sea captain Noah Drago to help.

The sexy scientist’s kisses turn Noah’s world upside-down. Soon, he’s plunged into a world of myth, magick and passion.
But will their growing connection-their love-be enough to save them from an encroaching evil bent on destroying all life as they know it?

Briefly, tell us what led you to write The Witch with the Trident Tattoo? (TWWTTT for short) What else have you published? 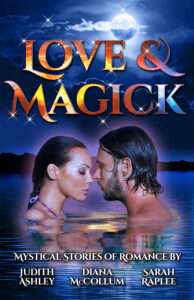 I have short stories in two different Anthologies: “Love & Magick”, which has the witch Hettie’s story in. Hettie is a time traveling witch and belongs to the Coastal Coven featured in “The Witch with the Trident Tattoo”. The second Anthology is “Gifts from the Heart”. 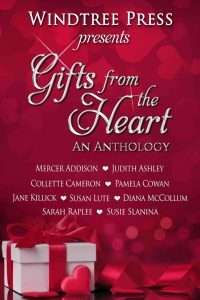 You’ve lived in the western United States for most of your adult life. What made you choose an east coast setting for the Coastal Coven Series?

It seemed like the appropriate setting. Hettie the time traveling witch lived in MA. I wanted a setting by the ocean, so my made up town of Waxing, MA became the main setting for the stories.

Your Sea Witch heroine, Ella, has an octopus named James for a familiar. What is a witch’s familiar?

Over the centuries familiars are said to have taken many different forms. I picked James, an Octopus, as Ella’s familiar. No matter what form a familiar takes, their responsibility is to assist the witch. The familiar can help with different types of magick, and also help with manipulations of natural energies. For instance, magick energy contained in stones and herbs and in the four elements, Earth, Wind, Fire, and Water. James back story is he was a minor prince in Atlantis and displeased Poseidon by stealing shoes, and Poseidon cursed him to live as an Octopus to pay his debt to society. I will add that James has a shoe fetish, even as an Octopus.

One day I will write James’ story. I think that would be a fun, fun story to write.

Is the Coastal Coven Series an open-ended series at this point, or do you have and end-point in mind?

There will be a story for each of the witches. And for the wizard that lives in the Hemlock tree, which is the passage between the past and present.

What are you working on now?
I am going to begin the second book in the Coastal Coven series this week. I am deciding on a title over the weekend. I need at least a working title to begin, that’s just the way I write.

In TWWTTT you created an engaging teenaged mermaid character. Have you considered writing Young Adult or New Adult novels?

Pink haired, Mischell! I did love writing this character. She will have her story one day. I don’t think as Young Adult, maybe a New Adult novel.

What are some books you’ve read recently and loved?

What is your favorite piece of writing advice?

BIC FOK-Butt in chair, fingers on keyboard! as Nora Roberts said you can’t edit a blank page. So put words on the paper and move forward.

Leave a comment for a chance to win a free e-book, I will be giving away two e-books. 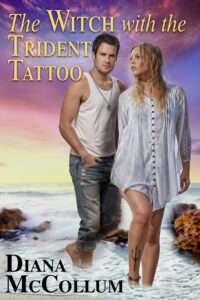 Please share an excerpt from The Witch with the Trident Tattoo with us.

Draft: The Witch with the Trident Tattoo

The town meeting last night had left a bitter taste of disappointment in Ella Stone’s mouth. She had tried her best to convince the upstanding citizens of Waxing, Massachusetts the importance of suspending fishing for twenty square miles off the coast, and inland to Turtle Point and the beach in town. She also suggested no swimming for a couple of weeks while she researched the unknown carbon based matter depleting the nutrients necessary for sea life to be sustainable. They had rejected her proposal and it had stung, and still stung.

The fishermen wanted to make a living, she understood. If they continued to fish and toxic organic matter continued to grow, fisheries would be depleted in a short time. Not to mention she couldn’t be sure if the organic material was toxic to humans or not, it was too early in her research to tell.

Arriving for her Saturday shift at her friend Hettie’s gift shop, The Crystal Witch, she seethed with fury. Her pulse beat a fast tempo, sending beads of determination over her skin. Ella marched down the aisle of scented soaps and candles toward the back of the store, as sparks of pent up Magick flew off her. Candle wicks on the display table burst into flame when she passed. As she breezed by the rack of wind chimes tinkled and rattled as if a gust of wind blew through the store, when none did.

“Ella, what’s the matter?” Hettie Wynn stood in the office doorway, hands wrapped around a cup of coffee.

Ella handed the local newspaper, Lighthouse News, to Hettie. “The meeting last night was a bust. Apparently I am a crazy woman scientist who doesn’t know what she’s talking about. Wait, no—‘environmental whacko’ is what they said.”

“I’ve got a degree in marine biology and oceanography from Salem State University. I’ve studied under some of the most prestigious professors, and they call me an ‘environmental whacko’?” Ella removed her sunglasses and used the edge of her sweater to clean the lenses.

“Did you present your findings in terms they could understand?” Hettie reached out and steadied the wind chime rack.

Ella walked over and blew out candles one by one. In so doing, she blew sample herbal powder out of the display bowl and covered the floor in many colors. She harrumphed at her blunder and crossed her arms. “Sorry for being in such a dither, but you know what I’m up against.”

“Yes! He wants answers, and only from me. ‘What happens in the ocean is a matter for the realm to manage. I’m depending on you to find the answer. Do not involve the human governments.’ He’s such a pretentious monarch, always playing games with me.” Unshed tears of frustration threatened to spill over.

“These waters have been in the care of my family since my ancestors first stepped on shore at Plymouth. There’s never been anything of this magnitude, anything capable of destroying marine plant and animal life to this degree. Whatever has damaged the flora and fauna hasn’t reached shore, but I’m concerned because it’s just a matter of time till it does. I’ve named the toxin Razor Toxic Bloom-RTB-1, and it is spreading pass the outer banks toward Waxing.”

Ella stalked over to the screened back door. A slice of ocean was visible from here, sandwiched between two cottages across the alley, an early May breeze blew across her face. Something was invading the waters of her ocean. Her mother before her had been the sea witch in charge of taking care of these coastal waters. Ella had inherited the position when her mother and father were called by Poseidon to protect the Bering Sea. “Time is of the essence. Poseidon doesn’t want government agencies involved, or other marine biologists. He’s got his reasons for believing an immortal is responsible. This problem is for me to solve and time is running out. Whatever RTB-1 is will reach our shore eventually if not stopped.”

She crossed her arms over her chest, and turned back to Hettie. “Commercial fishermen protested the loudest, and I understand fishing is their livelihood. But if fish are unhealthy, should anyone be eating them? All the mothers agreed to not let their kids swim or wade for two weeks.”

“Do you think you can find an answer by then?”

“I don’t know. I hope so.” Her stomach clenched. “Do you think what’s happening in to ocean is something our coven should look into?”

Hettie walked closer and put her arm around Ella. “I think you need to call on your resources. You are a Sea Witch, none of us are. We can help you on land, but water is your domain. Have you contacted James? Or Mischell? Maybe one of them could do some investigating for you?”

“You’re right. Of course, I’ll contact James.” A fluttering in her chest made her realize she wasn’t alone. She had her familiar, James the octopus—the Coastal Coven and her laboratory. She’d find the answer.